Phase 1/1: Spekulationsphase completed
The different possibilities and preferences of transport of Berlin’s citizens and the use of public urban space are often in conflict with each other. This presents a challenge for the transformation towards a sustainable future of urban mobility in the city. Let’s envision all possible mobility futures, and reimagine our present world together.
Spekulationsphase
Spekulationen: 45
Bewertungen: 496

Challenge beendet
Probable
Desirable
Improbable
Undesirable
How might we rethink Berlin’s future of mobility?
How might we rethink Berlin’s future of mobility?
In 2040, there are no longer private motor vehicles in the inner city.
Summers are now so hot that it is no longer safe to ride your bike during the midday heat.
A Black Swan incedent is likely to happen within the next 20 years.
The banning of private motor vehicles leads to a political and cultural backlash.
Many roads have to be restricted to one-way roads as the cars get increasingly bigger and cannot pass each other.
Cities remain places for everyone - with urban structures that are diverse and provide space for the unexpected.
There are more sharing projects.
Different forms of public/sustainable transport will be seamlessly integrated.
Life in cities takes place mainly in the local neighbourhood and using active transport modes as all places necessary to visit during a day are nearby.
In some central areas of Berlin private cars are fully banned.
Cities have been widely restructured as cities with mixed urban areas and short distances to reduce transport volume and to strengthen active mobility.
The 15 minutes city has become a reality and citizens have access to all services they need within that range.
A new law prohibits empty rides of autonomous private vehicles as their introduction yield in a high rise of transport trips, including going back and picking up a new person.
Reducing parking spots for motor vehicles has opened up public pockets of space in the city to be transformed into green spaces.
The 15-minute-city model is now in effect, people no longer commute from Spandau to Mitte everyday for work, etc.
Cargo bikes, small vehicles and more intelligent logistics systems have changed the way goods are transported.
Cities are able to deal with major changes (like climate adaptation, migration…) by robust and flexible public transport systems and multifunctional and green public space.
Berlin has city-wide network of cycling lanes that are fully separated from other traffic.
I wish that Berlin invested more in public transportation outside of the Ring.
I fear the future will consist of boring and mainstreamed mobility solutions only. A future without Ferrari and McLaren.
I expect that rental and/or shared electric car and bike offers are more affordable and accessible to everyone.
Inside the Ring, Berlin is car free.
There will be no cars owned by individuals anymore.
the city will drag its feet on the necessary changes because taking away space from cars is still something politicians won't touch.
Public space will be less dominated by private motor vehicles and opened up for other public use cases.
Travel with dog via DB trains gets easier and cheaper with the possibility of toilet and run-breaks  for the dogs when it is a long trip. Maybe with a hop on/off option without needing a new ticket.
I wish that Berlin limited traffic in zone A, not allowing private cars and creating even more green areas.
Car free city districts are enabled by using public transport or bicycles for shorter distances.
I wish an organisation would buy up and take care of privately owned cars, pooling them for their owners and other members in a way that mitigates all downsides to carsharing.
More bike lanes will have emerged.
Seamless ticketing has been achieved for all of public transport.
Mobility services are barrier-free, universally accessible for everyone and do not favor anyone.
I fear I will not be able to enjoy the magic of a night ride though Berlin in a car, listening to music and being free.
Less space for stagnant cars, more space for cyclists. Bike lanes expand into areas formally held by parking spaces. Car traffic is limited to carsharing services and delivery vehicles.
I wish that it became possible to bring back horses to the city.
Commuting around the city becomes of energy itself.
I want Kreuzberg without individual car traffic
Parking spaces for cars will be cut by 75% within the ring, and these spaces shall be concentrated around the ringbahn stations.
I expect that there will be no cars owned by individuals anymore.
The future of Berlin will be sustainable, humane, local and green.
There are garages of electric cars for long-distance rides outside of the city. These cars are durable and last 100 years. Inside the city, there are wide bike lines, for bicycles of all kinds, electric and not,
Berlin 2030: There are no more private cars in the city city. There are flexible pick-up services to get you and your things from A to B.
I expect that parking of private cars in public spaces is restricted to residents, for the same costs as renting a garage space, while commuters are directed to public parking garages at mobility hubs
All cars must be electric to drive in the city.
Private inviduals and citizens will not use private cars anymore inside the city and public space is re-used for community purposes.
Challenge Details

Berlin is a very diverse and multicultural city, which brings with it a social complexity that is reflected in a variety of different political views, opinions and lifestyles. To find common grounds for the ongoing transition towards a more sustainable future of urban mobility in Berlin is often difficult. We see, amongst others, challenges arising related to inequalities regarding the choice of and access to different modes of transport; conflicts between personal needs and preferences, and shared responsibility for common urban space; the fear of change and resistance to the use of more sustainable transport modes – whether new or old. One of the goals of the European Green Deal is sustainable and smart mobility. To reach that goal we have to engage in an open dialogue, challenge our routines and provide education on alternative and sustainable modes of transport. 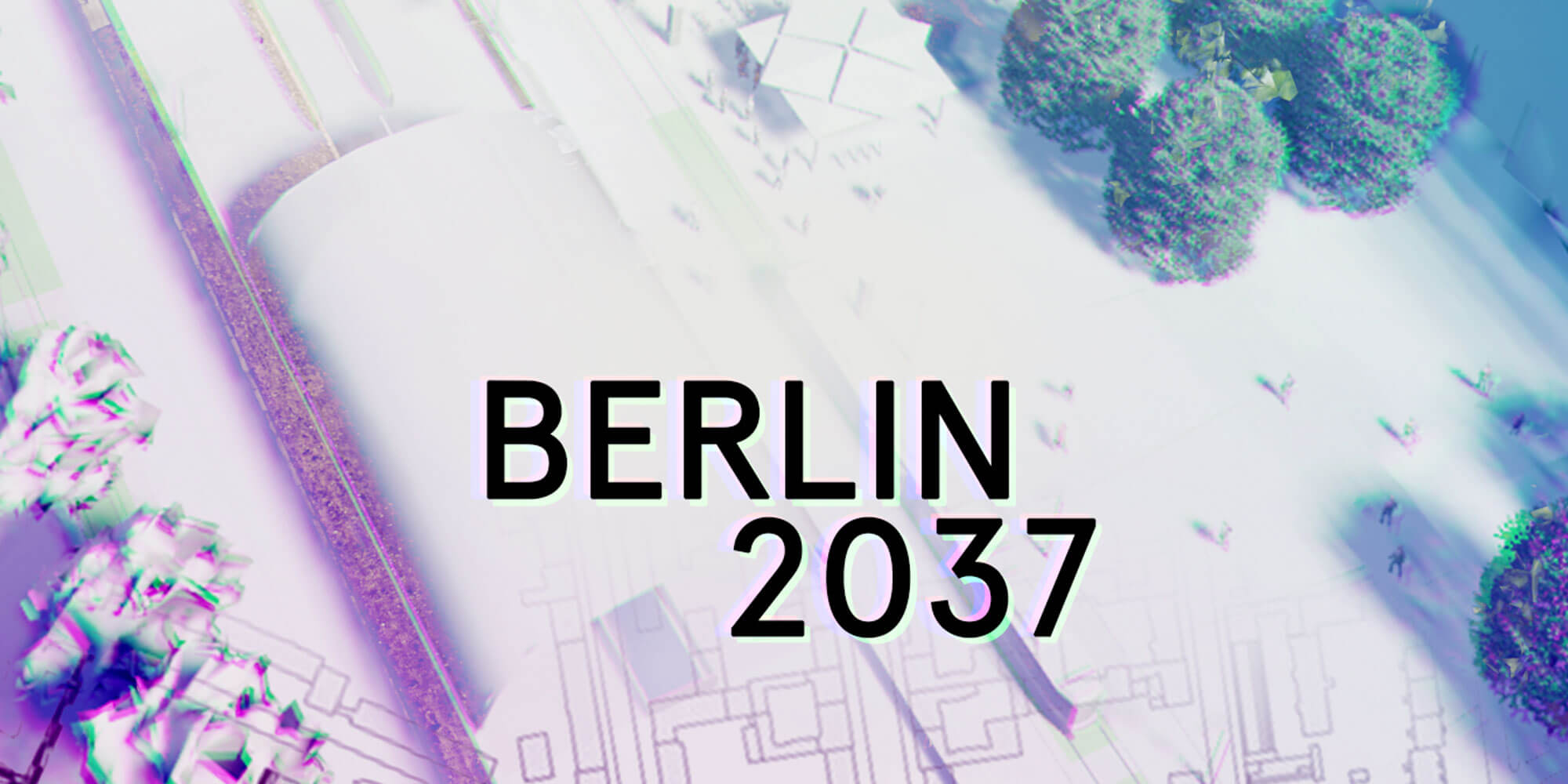 Berlin 2037 is a multisensory cyber-physical installation that connects a bicycle to a virtual reality headset. In the fictional narrative experience, you meet 14 year old Maya (played by Helena Zengel), a computer and 3D animation nerd living in Berlin, who has just met with a bike accident. Determined to use her skills to transform her city, Maya sets herself a mission: to create a virtual version of her city situated in the year 2037 when the city will turn 800. A city that’s child-friendly, safe and sustainable. Based in Berlin, the virtual world combines large scale photogrammetry scans of the city today with imagined, futuristic CG animations to tell a scientifically sound story.
Can we imagine a sustainable and thriving future for all of us? How can we get there and what may be the hurdles?

The residency is organised as a mission-driven journey through the topic of mobility in Berlin in close exchange with a diverse group of local experts from all sectors. Through the local experts and connected partner institutions, such as the Deutsches Zentrum für Luft- und Raumfahrt e. V. and Technical University Berlin, Felix Gaedtke will get access to rich data about mobility in Berlin, in-depth knowledge about local contexts (including spatial, social and political aspects) and a variety of technologies to measure and evaluate mobility behaviour.

In October and November 2021, 12 Regional S+T+ARTS Centers called international artists working at the intersection between science, technology and the arts to apply for a 6-month residency. The residencies respond to local sustainability challenges that have been defined by invited Local Experts Groups during workshops that took place in July-September 2021. The Regional S+T+ARTS Center STATE Studio in collaboration with BMW Foundation has announced Felix Gaedtke as the winner of the S+T+ARTS Residency New Modes of Mobility. During the residency, the artists engage with the Local Expert Group, the general public as well as other relevant stakeholders in a strongly collaborative process. This crowdsourcing campaign on Futures Canvas forms part of this process.

Since its launch five years ago, the S+T+ARTS initiative has hosted over 125 residencies across its different projects.
Repairing the Present will be adding 21 thematic residencies to the portfolio. Each of the residencies points to an EU Green Deal or a New European Bauhaus goal and reflects pan-European or global issues that require solutions tailored to specific regions.

STATE is a Berlin-based art-science initiative with the mission to create opportunities for cross-sectoral encounters and interdisciplinary creativity. Through its exhibitions and open program, it offers curated deep-dives into current trends in science, society and innovation and creates a platform for collaboration between artists, scientists and curious others.

The BMW Foundation Herbert Quandt promotes responsible leadership and inspires leaders worldwide to work towards a peaceful, just and sustainable future. Through its activities, the Foundation aims to advance the Sustainable Development Goals of the United Nations 2030 Agenda. Guided by the key concepts of governance, innovation, and cross-sector partnerships, the BMW Foundation supports and initiates forward-looking solutions at the local and global levels.