Change is already out there. When looking closely, we see change emerging everywhere in society and its niches. But often such threads of change are perceived as fragments. To reflect on and tackle the complex challenges of our time, we aim to interweave these threads of change into a collective framework. For that, new cartographies are needed – beyond cultural, political, institutional or disciplinary boundaries.
The patterns of new beginnings may come to the surface through interweaving threads of change. Interweaving Change is about opening up spaces for empathetic encounters, meaningful connections and artistic speculations necessary to responsibly lead toward a more just and sustainable future.
We collect and cluster inputs from contributors across regions, sectors and communities to gather diverse perspectives on two guiding questions: What are the threads that make up the fabric of a just and sustainable future? What are the developments that might shape it?
The collected data is co-curated regarding probability and impact in order to build a shared understanding of the diverse and possibly contradictory entries. We aim to interweave thoughts, knowledge and perspectives on possible futures across generations and cultures.
Cartographies of Change is a public, crowd-sourced knowledge platform to map trends and speculations about what a post-crisis society might look, feel and sound like.

337 Ratings
68 Speculations
14.09.2020: Challenge Start
28.10.2020: Exhibition Opening: Fabric of New Beginnings
15.11.2020: Challenge End
Highlighted Speculations
Most Controversial
Medical nanotechnologies will have addressed shortfalls in healthcare and created more precise treatments and diagnostic tools.
Most Desirable
With the successful implementation of gender equality throughout all spheres of life, we will be facing a holistic, consensus-driven and therefore more just, sustainable, tolerant and inclusive future.
Most Propable
Digital learning will play a central role in school, university and in our whole life.
Least Propable
Politicians all over the world will have learned that building borders is not the right thing and that only by collaborating with each other we can solve the world's biggest problems.
Submit your own idea →
Connected Exhibition 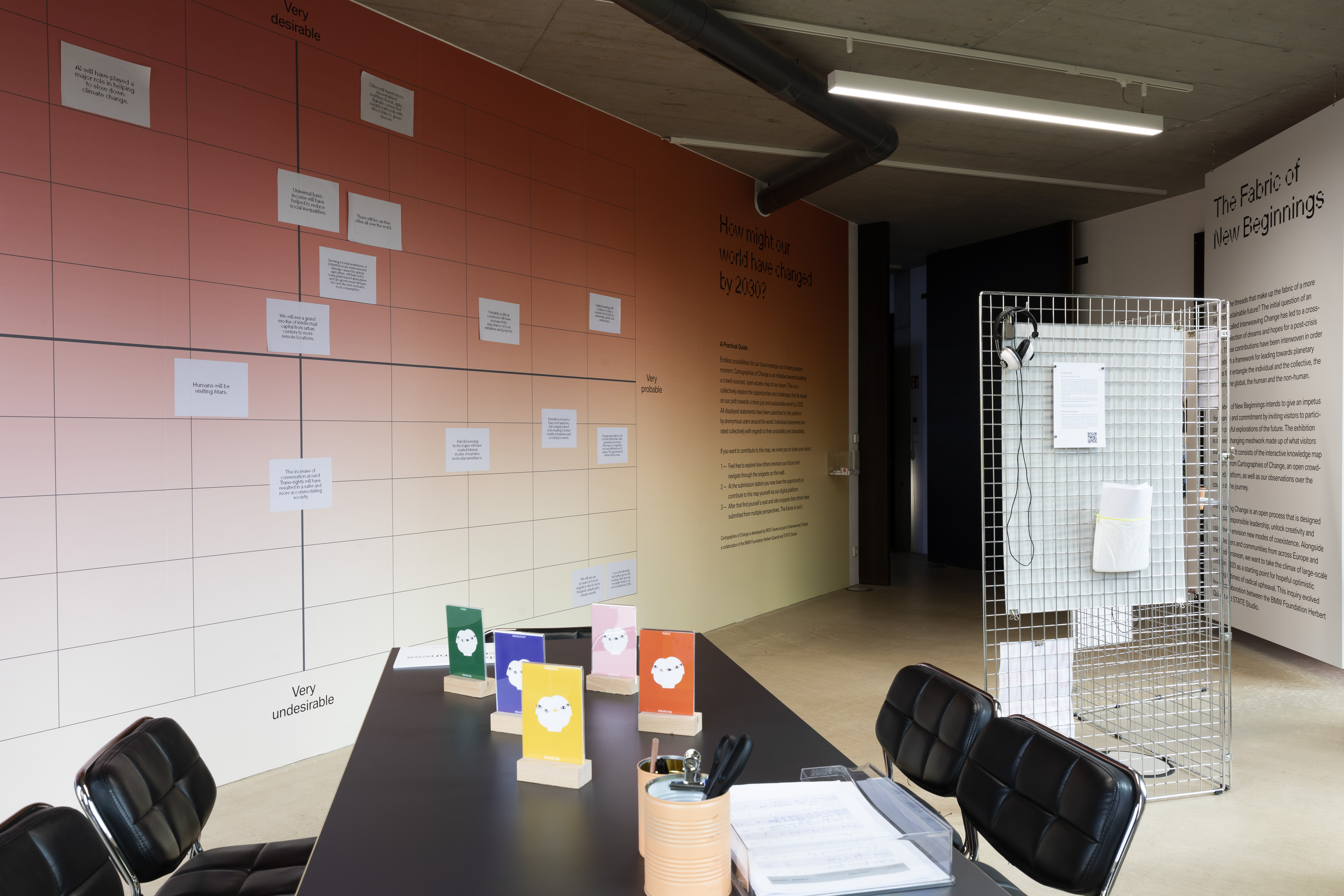 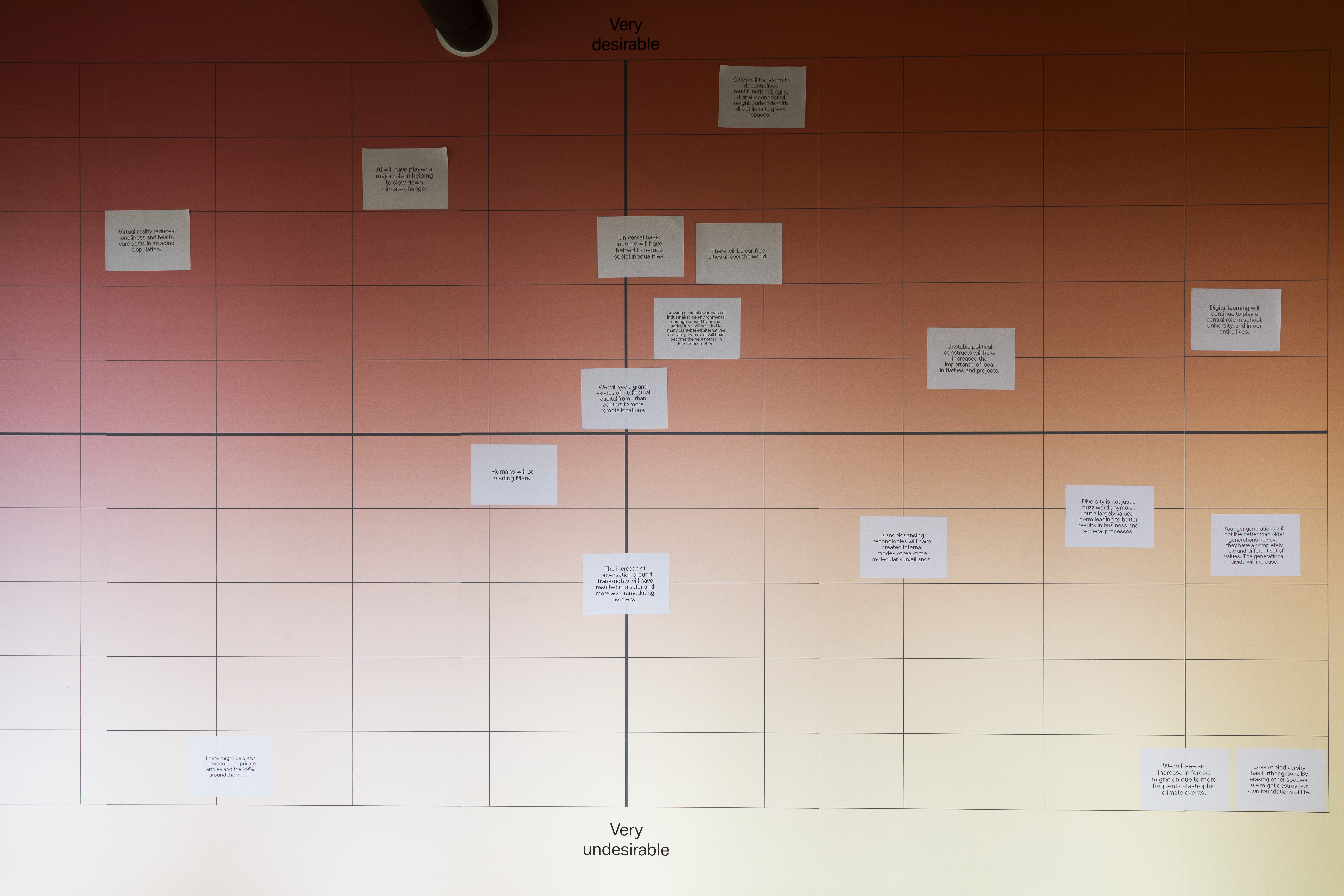 The Fabric of New Beginnings is a collection of individual and collective dreams and aspects of a sustainable and just future that will be exhibited to open up the process of Interweaving Change. We intend to give an impetus for change and commitment by means of participative public display. The exhibition includes the co-creative contributions from the Responsible Leader Sessions, the Community Interplay Series and the crowdsourcing platform Cartographies of Change. These contributions are interwoven in order to maintain a long-term framework for leading toward hopeful planetary visions – visions that interconnect the individual and the collective, the local and the global, the human and the non-human.
[visit exhibition website]
[watch exhibition video]

Interweaving Change is an artistic exploration of leadership, purpose and future possibilities, recognizing the interconnectedness of all living beings and systems. The program strives to interweave the patterns of change that have been emerging in the face of crises, in order to co-create planetary visions for new modes of coexistence.
It is guided by an inquiry into the threads and patterns that make up the fabric of a more just and sustainable future and aims to advance the United Nations 2030 Agenda.
Interweaving Change is an open process to inspire responsible leadership, unlock creativity and collectively envision a just and sustainable future. Alongside leaders and communities from across Europe and the Mediterranean, we want to take the culmination of large-scale crises in 2020 as a starting point for hopeful thinking in times of radical upheaval and to collectively create planetary visions for new modes of coexistence.

The BMW Foundation’s Responsible Leaders Network is a diverse and joyful community of purpose, connecting more than 1,800 Responsible Leaders in over 100 countries. Each member commits to playing an active role in shaping the network: connecting with others, sharing knowledge or experiences, collaborating, and co-creating across sectors, cultures and countries. Members of the network are highly diverse in origin, profession and background, yet they are united by a shared purpose to advance the goals of the UN 2030 Agenda.

We believe in the strength of the Responsible Leaders Network as a community of purpose. What’s more, we believe in the power of community – in communities’ ability to provide a sense of belonging and purpose, and in their potential to foster collective impact.

Growing curious about the change that we can achieve together rather than alone, we invited a selection of six change-creating communities with strong ties to the Responsible Leaders Network to join and interplay with us in our inquiry into the threads of a more just and sustainable future.

ATÖLYE is a 21st-century creative services organization that places an Academy and a Strategic Design Studio within a vibrant Creative Hub. The interdisciplinary interaction that takes place within ATÖLYE is enabled by our diverse community. Consisting of individuals working in different professional areas including the creative industries, social sciences, business development, technology and engineering, our community develops new ideas, prototypes them, and shares their experiences.

Central is the dream of an Art decompartmentalized, fun and open, where the multidisciplinary exhibition becomes an artistic experience. Art is Central!

The community platform Curious Minds (STATE Studio) is an open environment where members can build meaningful connections over time and engage in creative, collective experimentation. Working in small groups on the wicked problems of our times, the members explore new forms of collective thinking and learning beyond disciplinary boundaries.

Digitalisation has long since ceased to be an option. On the contrary, the world needs innovative solutions and strategies to keep on turning even in challenging times. Under the motto Connect. Transform. Create., we believe that DAN has an important role to play in shaping our future across all spheres: whether arts & culture, business & the future of work, citizen participation, gender equality & inclusion or online media & journalism.
As the platform for digital pioneers in the MENA region DAN connects all those who contribute to the transforming of our life into a better future.

Not every community has a name, not every community needs a brand. But in every case, community evolves around something that connects – your craft, your place or the desire for a more just society. East London is a creative hub full of individuals and organisations affecting change in different ways. To reflect the different concepts that make community, we invited a hybrid selection of local communities based in East London through members of our UK Responsible Leaders Network to participate.

Reach for Change is an international non-profit founded in Sweden. We find local social entrepreneurs and empower them to develop and scale innovative solutions to improve the lives of children and youth so that they can reach their full potential. Since 2010, we have supported more than 1,000 social entrepreneurs in 18 countries, improving the lives of 4 million children and youth.

The project is a collaboration of the BMW Foundation Herbert Quandt together with STATE Studio and associated community partners across Europe and Africa.

The BMW Foundation promotes responsible leadership and inspires leaders worldwide to work towards a peaceful, just and sustainable future. Through its activities, the Foundation aims to advance the Sustainable Development Goals of the United Nations 2030 Agenda.
The BMW Foundation’s Responsible Leaders Network is a diverse and joyful community of purpose, connecting more than 1,800 Responsible Leaders in over 100 countries. Each member commits to playing an active role in shaping the network: connecting with others, sharing knowledge or experiences, collaborating, and co-creating across sectors, cultures and countries. Members of the network are highly diverse in origin, profession and background, yet they are united by a shared purpose to advance the goals of the UN 2030 Agenda.

STATE Studio is an art-science gallery and exhibition laboratory in Berlin, founded and developed in partnership with Wissenschaft-im-Dialog, the umbrella organization for science communication in Germany. It is a place for creative synergies between science, art and innovation, for discovering and exploring the breakthrough developments that shape our future. Through its open exhibition laboratory, it showcases inspiring works of artists and researchers, exploring the creative friction between cutting-edge science, artistic expressions and societal discourse.